In a ever faster developing cryptoverse there is a growing problem of interoperability. With more and more ecosystems coming to life more separate closed spaces develop where developers and users create their own universes without much interaction with other ecosystems or blockchains. This problem is especially dominant in the DotSamaverse where the ecosystem doesn't consist of just one, but two layer 0 blockchains. It is crucial for the health and future of the ecosystem that these two layer 0 blockchains can speak to each other and their userbase is seamlessly connected. 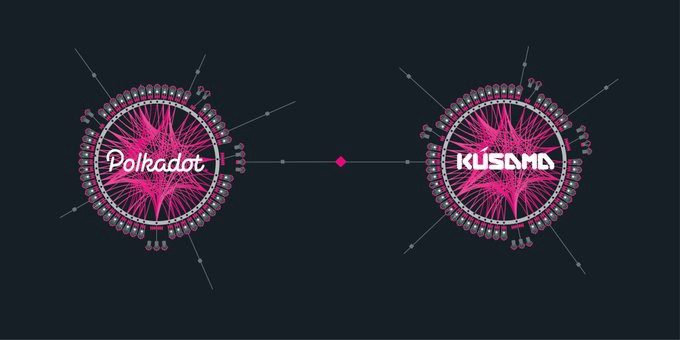 The Crab Network is the canary network of Darwinia and is the first blockchain in the Kusama ecosystem to natively support cross-chain, smart contract and NFT applications.  The Crab Network has four main pillars, which are:

with these Darwinia in symbiosis with the Crab Network will connect Polkadot with its canary network Kusama to a seamless cross-chain interoperability. For a more indepth explanation please have a look at question number 2 of the interview.

I want to put emphasis on the fact that Darwinia got three W3F Grants under it's belt.

The crab network offers 200.000.000 CRAB tokens and 8.000 CKTON tokens for participants in their crowdloans who help them securing their Parachain slot. One CKTON is valued right now at ~2300 CRAB. 90% of the rewards are vested over the period of the lease. You can get up to 20% more rewards if you contribute before the start of Auction #21. And you can get an extra 5% of rewards if you click here and use my referral link. As a guaranteed bonus, even if they won't win the slot you'll get a NFT blindbox worth more than 1 KSM and for contributions over 1000 KSM 1 BTC gets shared amongst the contributors.

Disclaimer: The CRAB token is trading right now live on MEXC Global with a value of $0,004. With the added interoperability and integration into Dotsama via a won Parachain slot the CRAB token will get a new value approach. If it will be valued as the projects I compare it against in the following paragraph is not guaranteed

With a maximum KSM hardcap of 50000 KSM at the current Parachain auction will crowdloan participants get base reward of 4162 CRAB token. This figure is the absolute bottom and will probably not reached. If it would be reached this would mean that 1 KSM would reward an average of around $944 if Crab Network would perform like already launched projects. 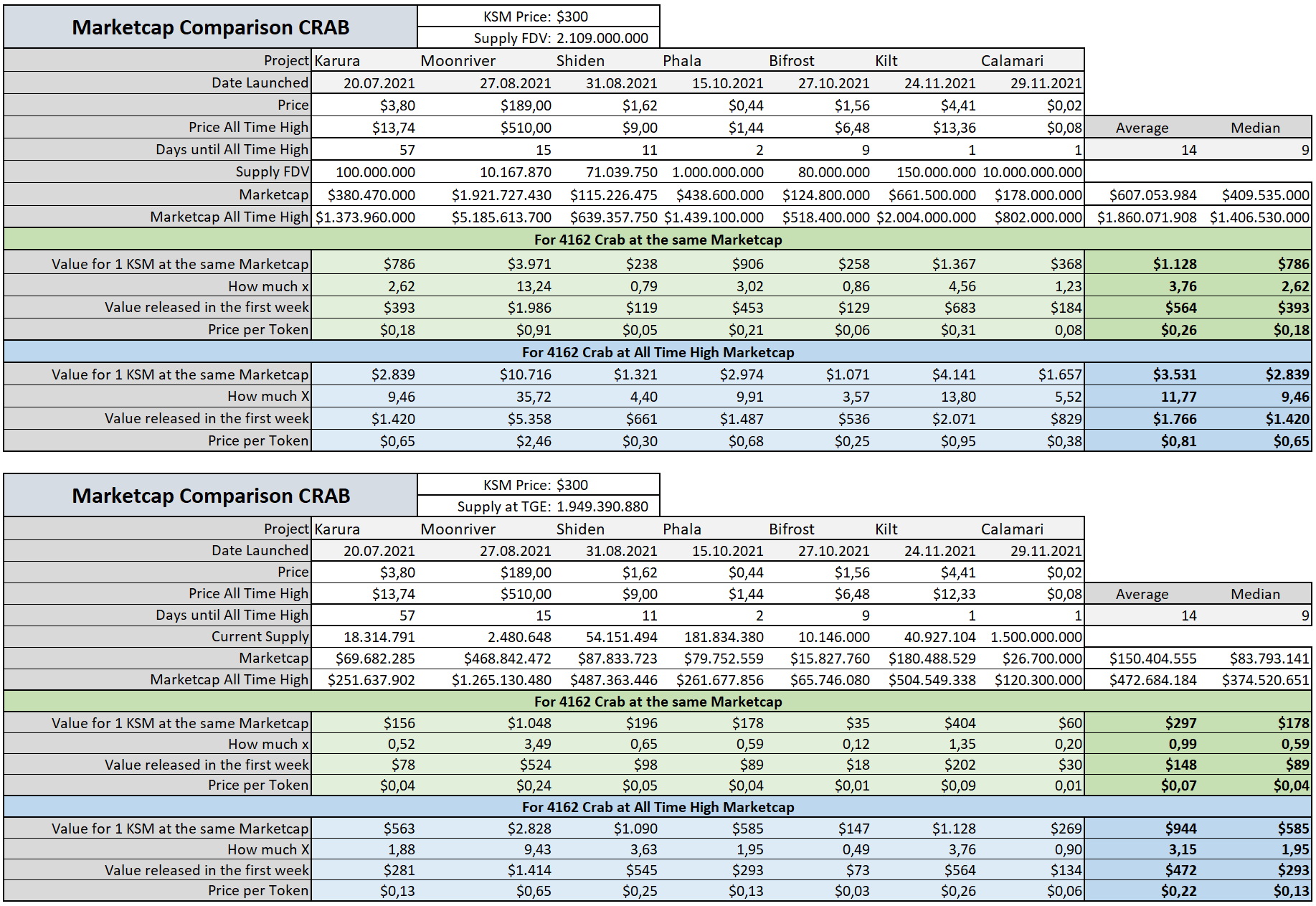 A more realistic estimation could be the average of the last three auctions which would come down to 20742 KSM contributed. This would increase the reward for participants to 10539 CRAB per KSM and would yield a lot more interesting rewards. In this case the rewards for 1 KSM are $2283. 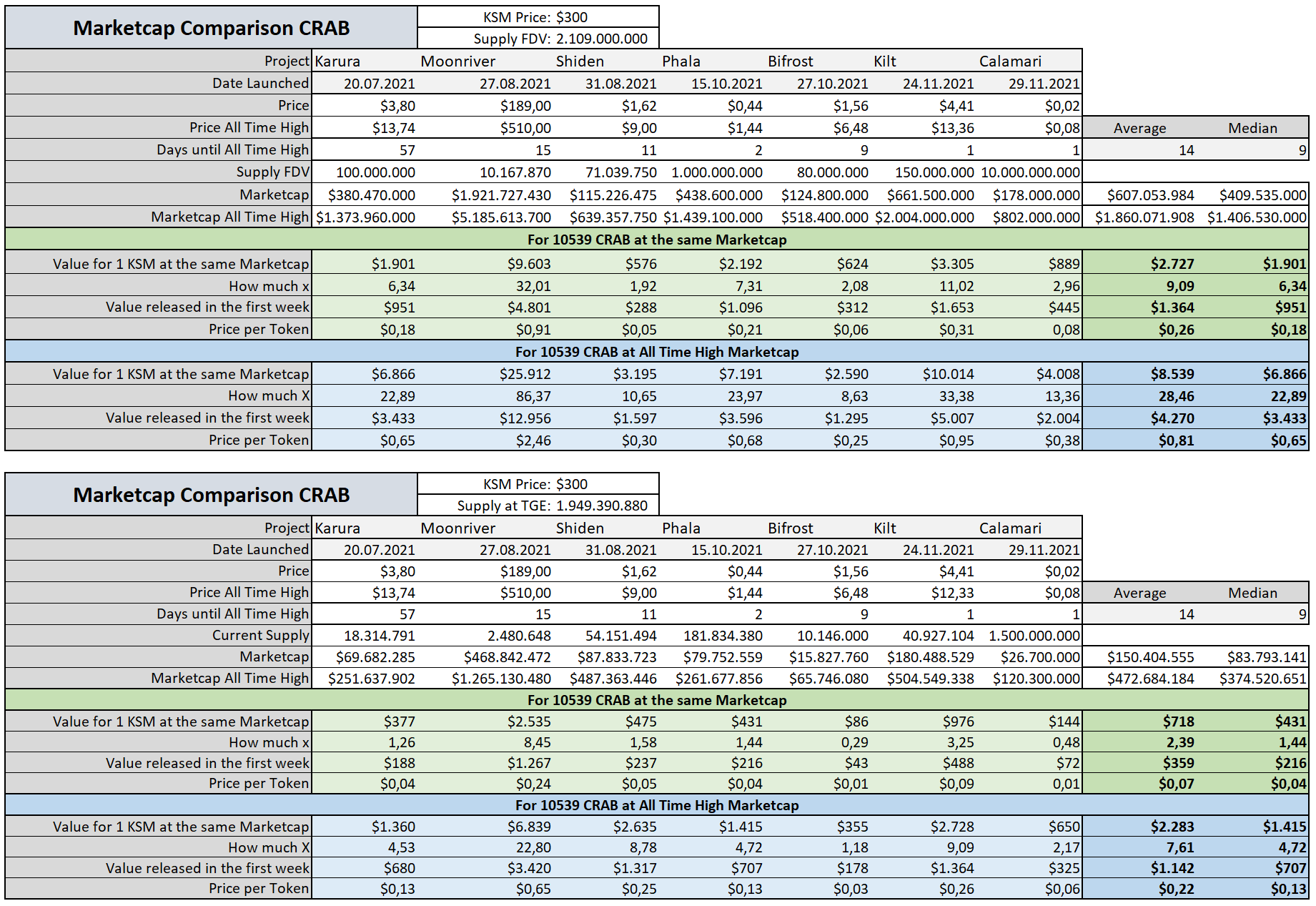 The token allocation of this project is a bit different than what projects usually bring to the table when they're going for a Parachain slot. Nearly all tokens, except the tokens which are being auctioned off in this crowdloan, are already in circulation.  This rare setup brings two different factors for investors. In my view the price will not shoot up at release because, different to most other projects, liquidity is already there. Unique's Quartz for example starts at TGE with only 3,75% of the tokens released. This means that the crowdloan from the Crab Network shouldn't be that interesting for people who want to get rid of their rewarded coins immediately. Darwinia limited this strategy already themselves anyway with the decision of only unlocking 10% of the rewarded tokens at TGE.  From a perspective of a long term holder could this bring some advantages, in the same case as $RMRK the CRAB token has no sell pressure from constant unlocks, which could prove as substantial for having a positive price trend. 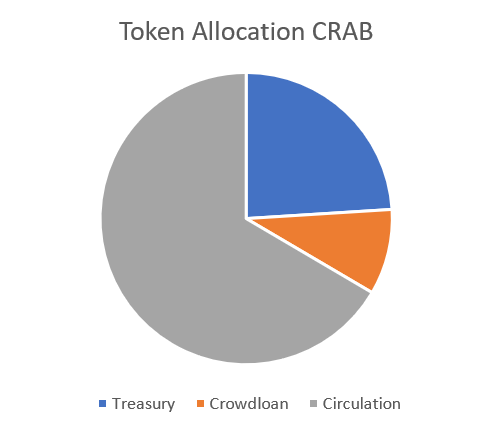 Unfortunately the Crab Network is not performing that stellar in the overview spreadsheet. A high allocation to tokens in circulation and no dedicated token pool for liquidity mining / staking is counter productive in scoring a high score. If you need a explanation of the overview please have a look here. I will have an eye on projects like Crab Network, Genshiro and Quartz how they are performing and will reevaluate afterwards if I need to change my rating for tokens in circulation.

The Crab Network seems like a good way to get exposure to one of the crucial projects for the DotSama ecosystem. The team behind the Crab Network is rooted deeply in Polkadot and Kusama. With a mention of Gavin Wood as a "Project to watch" and 3 Web3F Grants investor can be quite sure of the legitimacy of the project. For investor with a little risk tolerance it may be a good opportunity to jump in early to get the early bird bonus and hope for not so many contributions.

I would to thank the business development team of Darwinia to take the time to answer the following question.

Darwinia (with Crab as an integral part) is a value-bearing token router network secured by nPoS, and the resaons for having tokens are inherent to how the network operates not only in terms of security, but also democracy, and a bridge-hub network designed to support billions of value flowing between chains needs to have some skin in the game.

There are only two value-bearing networks of significance that will act as intermediaries between Polkadot, Kusama, and hetereogeneous chains in the near future, and Darwinia is one of them. Darwinia network as a whole operates at a fundamentally lower level than layer-1 parachains on the 'truth' layer, whereas custodial bridges are built on the application layer, adding unnecessary levels of risk. 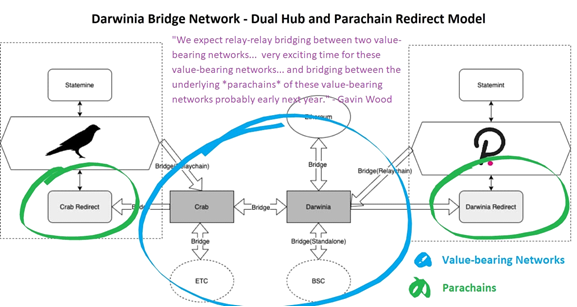 Darwinia developers have made significant contributions to the parity-bridge code (anything MMR) and also bug fixes, and although it is not finished yet, Darwinia has completed what needs to be done on their own networks for practical purposes. They likely would have received funding for this through W3f, but didn't apply due to RING token having already been released as primary currency of the Evolution Land game in 2018, thus disqualifying them. In essence, they self-funded the development of many of the bits that go into the parity-bridge code on behalf of the entire ecosystem. Their own modular multi-channel bridge architecture seperates value from communications channels for utmost security, has been audited, and is already deployed on Darwinia, Crab, Ethereum, and Binance Smart Chain is coming next. To sum it up, when compared to just about every other bridge out there available for Dotsama ecosystem projects, Darwinia is a better solution and they are more qualified in every single way.

The incentive is not only to help support the Dotsama ecosystem overall because all parachains will need secure bridging to external chains, but considering Darwinia is one of the only Substrate-based projects building critical cross-chain architecture it should really be a no-brainer for parachains and solochains needing to exchange value to choose and support one of their own. The Darwinia Crab network rewards package for crowdloan contributors is quite lucrative especially considering they are giving away land and other NFTs in the metaverse within the cross-blockchain game, Evolution Land, that uses Darwinia network as the foundational layer. In addition, there are guaranteed CRAB and cKTON token rewards when they win a slot, and all kinds of other stuff like BTC and other prizes even if they don't this time around.

Crab will be Darwinia's canary network just like Kusama. It will be the place where developers launch there dapps for testing before moving them to Darwinia. It will be the connection point for any Kusama parachains that wish to bridge to it.

Parachains are a shared-compute environment vs. solo-chains which are dedicated. Many chains like Composable and Moonbeam for example tout cross-chain interoperability and bridging but are not operating independent high-performance networks like Darwinia and Crab that are engineered from the ground up to be layer-0 infrastruture. Parachains and parathreads are able to use Darwinia's infrastructure in the background to realize that cross-chain interoperability transparently for their users. 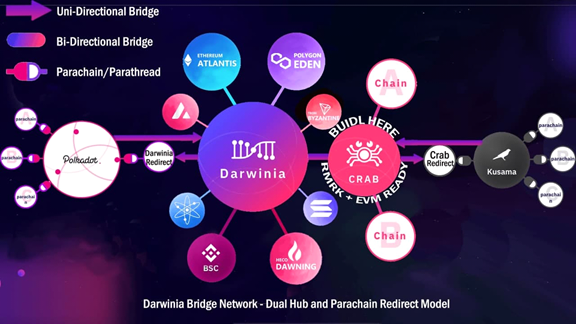 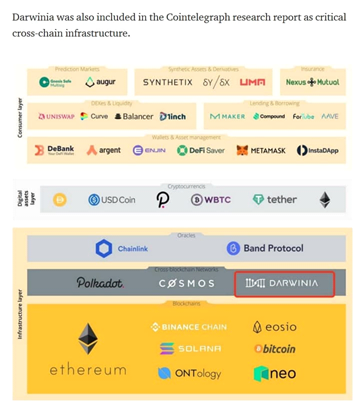 If I helped you with that article I would appreciate it if you leave a tip. Thanks!

crowdloanDarwiniaCrabParachainKusamaPolkadotanalytics
Crane's Blog
Analysis of the DotSama space. Created my own rating system for crowdloans. Love to theorycraft. Three things I would bring to a lonely island: Techno, Tea and Excel. You can find my tweets here: https://twitter...